John Hassall Fan Page
Welcome to the site dedicated to the poster king!

The Three Bears is a picture book about a family of bears who went for a walk and their home is visited by uninvited guest. Today we know the same story as the Goldilocks or The Goldilocks and the Three Bears.

She started wearing a cap. Her character changed too. She was not vain anymore. When her hair grew back, she was still wearing the cap. A prince came by, while she was working in the field. He was very pleased to see a girl of such beauty yet so humble. They married soon! 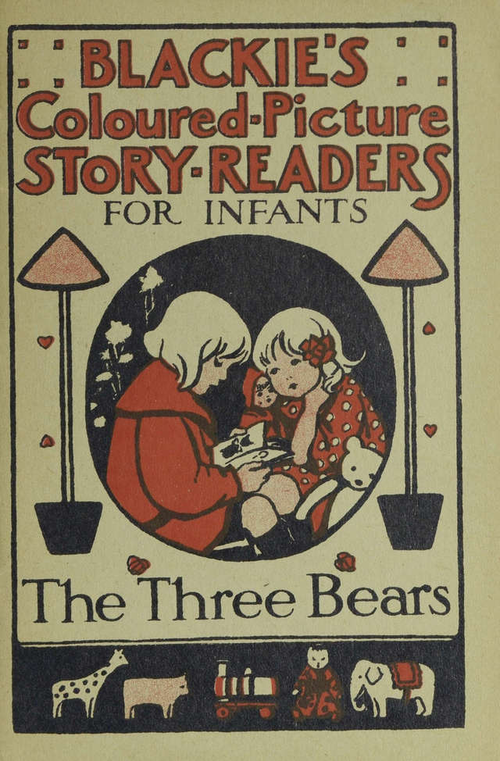 This particular edition is published by Blackie and Son in London and Glasgow together with (not correlated) Golden Hair, a story about a girl with golden hair which was used instead of golden thread. 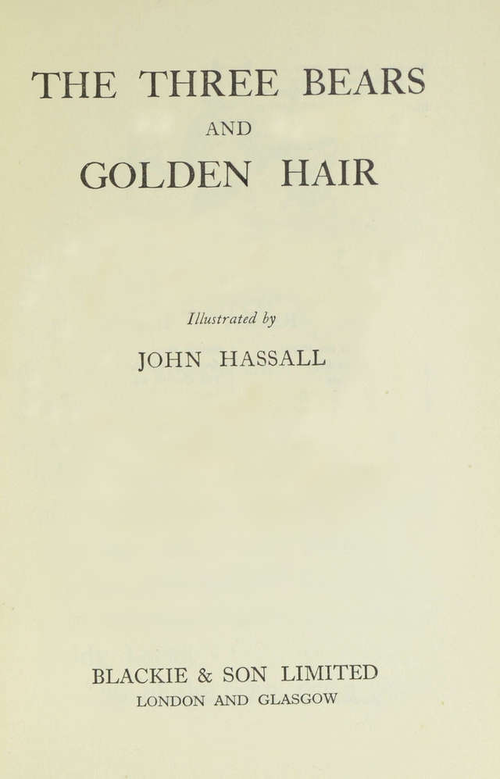 All pictures are drawn and colored by John Hassall. 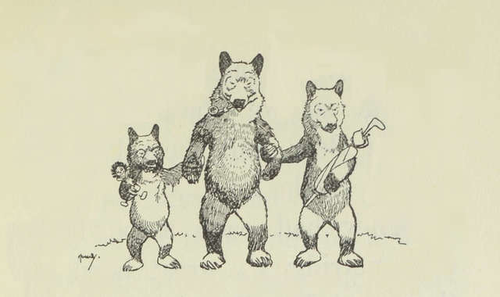 The porridge was too hot so the father Bear, mama Bear and little Ber went for a walk. 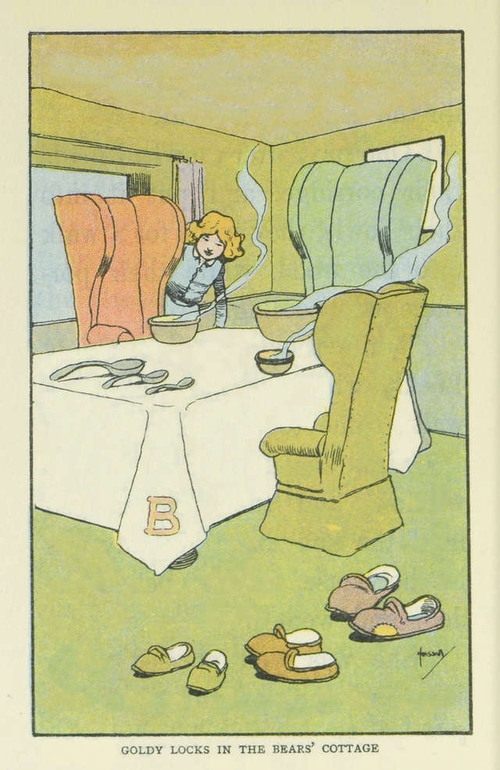 A girl came by the house and check what's in. It wasn't locked. She found food on the table, ready to be eaten. She tasted from the first bowl. Too hot. She tried another. Too cold. But the third one was just right.

Then seh tried the cahirs as well. The first was too too large. The second one was too large too. So she sat in the third one. She broke it.

She became tired and decided to take a little nap. She went upstairs where she found three beds.

The first one was too hard. The secod was too soft for her. But the last one was just right. She fell asleep. 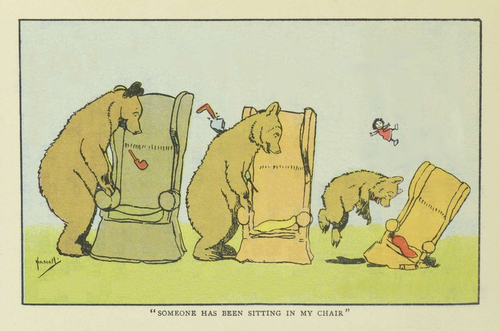 When the bears went home they immediatelly found out somebody intruded their house. Somebody ate from all the plates and the porridge of the little bear was eaten up.

Somebody also was messing around with their chairs. The chair of the little bear was broken.

And then they went upstairs - to the bedroom. There they found all the beds in mess and a girl with golden curly hair sleeping in the bed of the little bear. 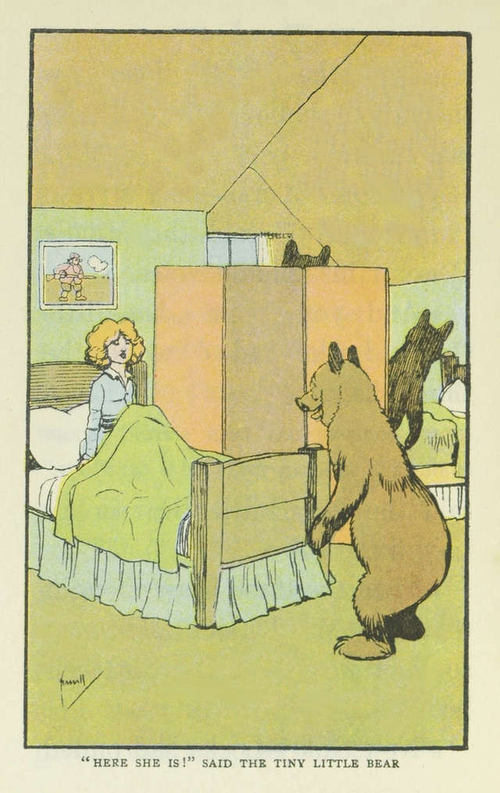 She woke up and saw the bears staring at her. Of course she was afraid. 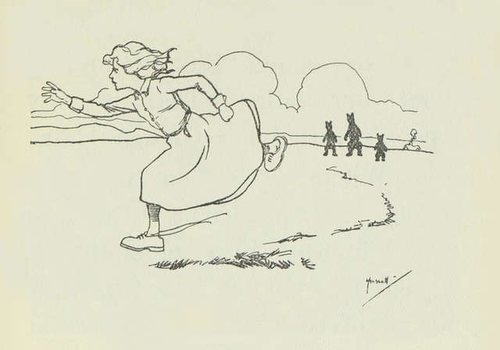 The Goldilocks ran away. The bears went after her but she was too fast. And they didn't want to bother with her too much. She cause enough inconvenience to their family already!

Please note how skillfully was used the power of so-called magic number three in this fairy tale. Apart from its repetititve melodious effect, it's also utilized for


While many fairy tales use the number three (it's by far statistically the most popular of all numbers), The Three Bears is one of rare examples where it's used in both ways.

More about the story:

Once upon a time, there was a girl with bautiful hair, shinier than pure gold. Her mother who was a seamstress actually used her hair for special orders instead of golden threads. The girl, called by everybody Golden Hair, was very proud of her hair. We can even say she was vain.

One day her mother got an order from a princess. She had to make her a beautiful dress of silk. After a while she decided to decorate it with a few golden hairs from her daughter. The dress paned out sensational. When her mother didn't look, Golden Hair tried the dress and pretended she was the princess. Her mother saw her and was very angry. She immediately sent the dress to the princess.

The princess was very satisfied with the dress. Golden threads particularly pleased her. She wanted to have a slipper from the same material too. But nobody knew what kind of thread that was. Then the princess found a hair which came off the Golden Hair when she was trying her dress. She sent her men through the kingdom to find the person with such hair. 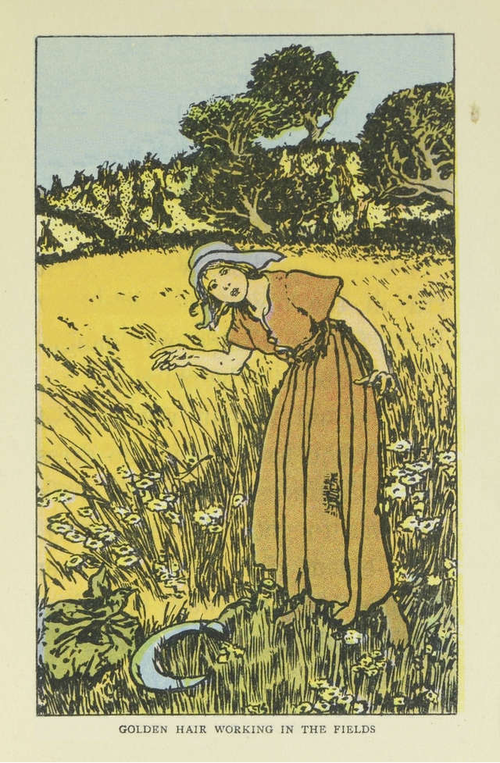 She started wearing a cap. Her character changed too. She was not vain anymore. When her hair grew back, she was still wearing the cap. A prince came by, while she was working in the field. He was very pleased to see a girl of such beauty yet so humble. They married soon!
While this fairy tale is not so popular, we can easily recognize the elements from some more known stories: